I love the word if. I haven’t always. Because the what if? question used to throw me into obsessive compulsive thinking patterns. I’ve somehow managed to turn the pesky logical/analytical reasoning thought processes that often accompanied the what if? question into a simpler process of answering with my imagination. As in, instead of going down the rabbit hole by answering with even if or if and only if or if….then, I can answer the what if? question with……..”Who cares?“ or “Let’s go for it!” or “Can I learn something new if…….?” Last year, I was presented with an opportunity for an incredibly challenging commission. After catching myself turning to my default mode of logical/analytical/conditional ifs as to why I was not the painter for the job, I sunk into my imagination ifs instead. And then the fun began.
It helped that I was given 100% artistic freedom.

This is an acrylic painting of the Charles Evans Whittaker U.S. Courthouse in Kansas City, Missouri. Justice Whittaker served as judge on all three levels of the Federal court, including the Western District of Missouri, Eighth Circuit, and U.S. Supreme Courts. He was appointed by President Dwight D.Eisenhower. 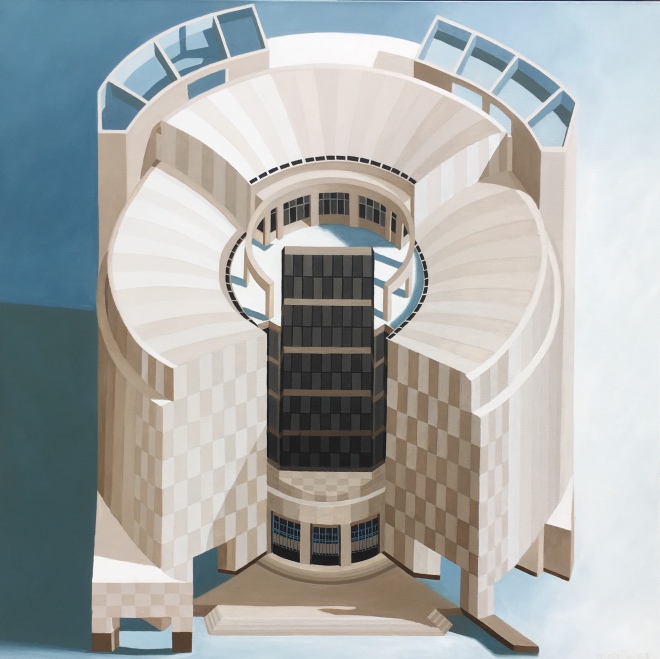 The painting was commissioned by Loren Whittaker as a gift for her husband Tom, the grandson of Justice Whittaker. Tom Whittaker is CLO of JE Dunn Construction Company, builder of the Federal Courthouse. Tom has a view of the courthouse from his office window, which can be seen to the left of the painting. 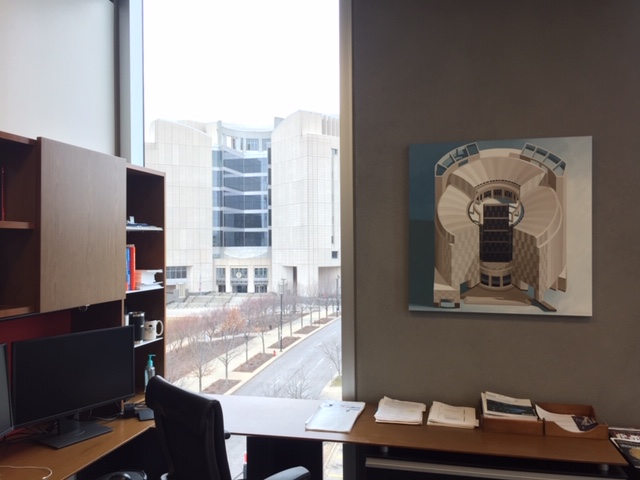 Loren did an unbelievable job of orchestrating the entire journey, down to the timing and placement of the painting. This photo was taken soon after Tom was surprised with his gift. Perhaps the best photograph ever.